Ellie, my dear girl — Well, you probably don’t remember it, but Opa and I came to Seattle for your second birthday in August. Yes, you’re two! You aren’t a little baby any longer.

In one particularly memorable episode, while under Opa’s “supervision,” you found the only mud hole in a nearby park and planted yourself in it. You got up, triumphant, and sat back down in it again and again. (All of which leads to the question of why you have to buy kids expensive toys when all they need is dirt and water for a very fine time.) 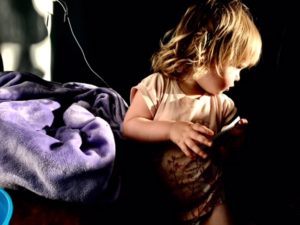 But anyway, we came for a week, we hung out with you and your parents, and we went home. We’ve now been back in Austin a month and we’re getting mixed reports on you and giving out mixed reports on ourselves. This makes me think that life isn’t always easy in the early or later years. Let me explain.

Your mother tells us you’ve been throwing loud tantrums now and then. We all talk about it and try to understand why. “There’s a reason they call this age the Terrible Twos,” I tell your mother.

But also — we all agree — you’re going through a lot of changes. You’ve moved into an older class at day care. Your family’s townhouse is on the market. Your parents have bought another house that requires renovations.

And, finally — you’re going to be a big sister to a baby boy in January. I mean, talk about change. Your two-year-old world is approaching a total upheaval. No wonder you’re throwing a tantrum or two.

In the meantime, 1,770 miles and six decades away from you, your grandfather and I have been facing our own age-appropriate upheaval. He had major surgery almost two weeks ago in a San Antonio hospital for a serious condition that had to be addressed quickly. He woke up attached to tubes and machines, with medical professionals checking his vital signs and his next-of-kin trying to look calm and matter-of-fact.

Being sick and convalescing are every bit as unwelcome and invasive as a surgeon’s knife. Opa hadn’t been in a hospital since 1972, when he was relieved of his wisdom teeth. He’s in great shape, he’s a runner, and he’s self-sufficient; he didn’t like being flat on his back, in pain, and dependent. He was, I told people frequently, the most impatient patient I’d ever seen. Normally, he has a great, optimistic temperament, but recuperation made him surly.

It’s funny to think of you grappling with a new classroom, a new house, a baby brother — while your grandfather and I are tackling our own demons of vulnerability and mortality. It all makes you think the human condition can be trying and way too painful sometimes — and you’d be right.

But that’s all the more reason to jump in a mud puddle when you can and watch the dirt fly. Keep doing it, darlin’ — whenever and wherever you can. Love you, Coco