Dear Ellie — Look at you — barreling all over the place, talking more, looking more and more like a girl than a baby. Lucky for us your father is such a wonderful photographer and you’re his favorite subject. For example: 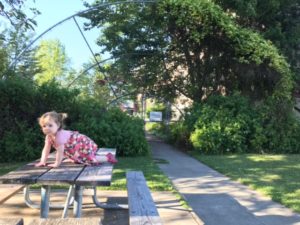 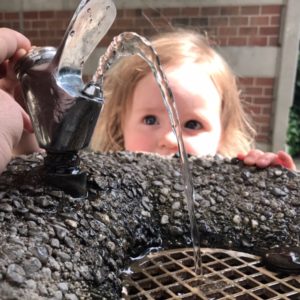 Opa and I just got back from a two-week trip to Spain and Portugal. We flew, took trains and buses, walked along cobblestoned streets, and ate and drank a little too well. It was a lovely time for us to spend together.

I don’t have any kind of in-depth analysis or great photos of either country (I’ll leave that to others). But I do have some thoughts about travel, in general:

1) Your grandfather and I are famous in certain tiny circles for traveling lightly. We never check baggage, we only bring carry-on luggage. This amazes some people, who ooh and aah, even though they probably think we’re nuts. When this happens, we preen and congratulate ourselves.

But, you know, there’s a downside to this traveling lightly business. Why not be honest? After a week, I was sick and tired of every one of the few pieces of clothing I’d brought. Sure, I mixed and matched them as much as I could, but repetition gets as old as household guests. (Not that knit top again! I now officially hate it and never want to lay eyes on it again in my whole life!) (Will somebody please steal my backpack and end my misery?)

Your grandfather, being a heterosexual male and no clothes horse, copes better. “You want to carry around more weight? Really?” he asks.

We pack up, we lightly move on again — often enough that nobody but us knows I’m wearing what I wore twice last week and the sight of it makes me a little nauseated. Maybe, if I keep moving, I think hopefully, I’ll outrun my clothes.

2) Traveling well with another person is an extremely rare and iffy business. You’re together constantly. You have to agree on where you’re going, how long and where you’ll stay, how you’ll get there. You’re dealing with unfamiliar places, trying to speak another language, however poorly. Every day, you have to concur on what you’ll do and where you’ll eat.

Think of it! It’s amazing you don’t kill each other.

After almost 45 years of marriage, Opa and I travel well together. We fight very occasionally and it’s almost always his fault — like the most recent time, when we were trying to find our hotel in Salamanca with rain streaming down on us and our eyes snapping little hate bullets at each other.

Later, after the rain had passed and we’d found our hotel, I watched Opa stop to photograph his latest obsession — the various designs of manhole covers. One after another — who knew manhole covers could be so interesting or even attractive? Fortunately, I’m a sucker for a guy with an enduring, oddball curiosity about the world. It makes every trip, every day so much more interesting. 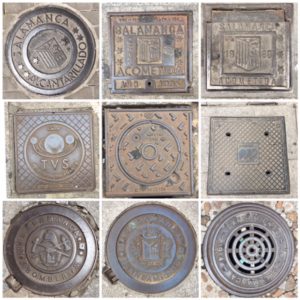 The manhole covers of Salamanca, Spain

3) In Granada, we had several dinners with one of our dearest friends, Bernard Rime. Bernard, a Belgian psychologist, is so close to us, he’s practically a member of our family. He was in Dallas working with Opa the year I got cancer, and saw us in those long days of surgery, chemotherapy, and radiation. When your grandfather and I were out of town, he allowed your 14-year-old mother to drive (a fact that still horrifies me, but never mind. Bernard is a European, after all). He went to Uncle Nick’s soccer games. He toured West Texas with us. He complained we liked catfish too much.

Sitting with Bernard the last night we all had together, I showed him photo after photo of your mother and father, your uncle Nick, you. Twenty or 30 minutes of our family photos — I wouldn’t have done that with anybody else. But Bernard seemed to enjoy them, looking closely, commenting, taking pride in how our children had matured.

Here’s what I think: Travel is very nice when you’re exposed to other cultures, other ways of life, great architecture, etc., etc. But there’s nothing more important than a trip or an occasion you share with one of the great good friends of your life. Bernard is one of those friends for us. You’ll have your own someday. Treasure them and make time for them. There’s nothing more important in life.

In one scene in the movie, the cultured, world-weary European hitman, Joubert, tells the hero, Joe Turner, that Turner must flee to Europe. Otherwise, as an embarrassment to his former employer, the CIA, Turner will eventually be disposed of. 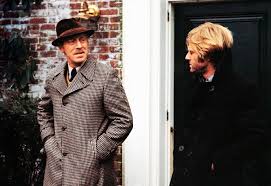 Turner shakes his head. He could never do that. He’s an American, he says. He misses his country when he’s gone.

Funny how often I’ve thought of that particular scene over the years, how it applies to me. For all my deeply held criticisms of this country, for all its imperfections, I’m still an American and I miss it when I’m gone. In fact — even though I try to blend in wherever I go and learn as much as I can — I never feel more American than when I’m in another country.

Odd how travel does that, teaching you things you’ve never known about yourself. I’m wondering how often and how far you’ll travel in your own life and what you’ll learn from it, my dearest girl.